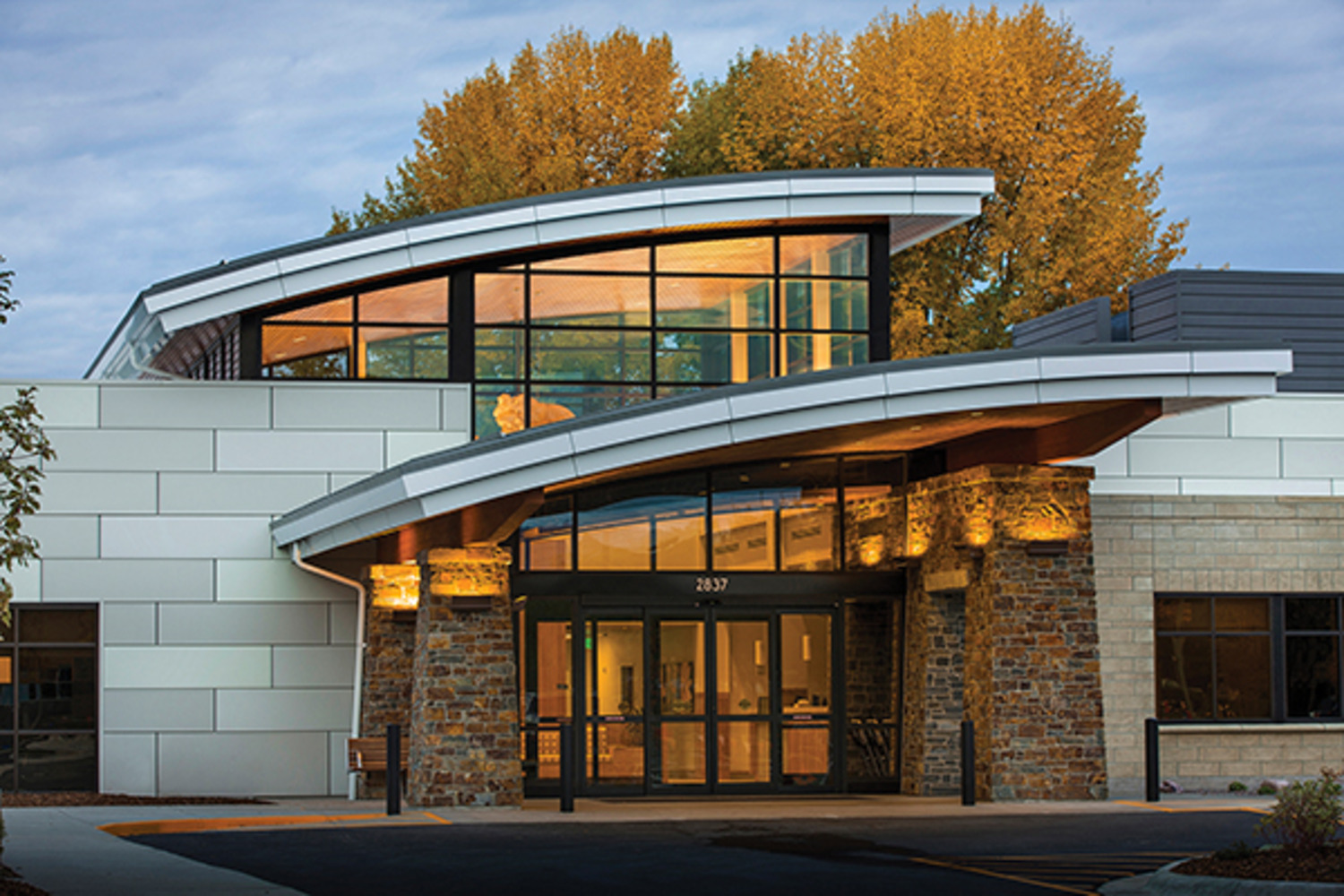 “From the outset, the main design criterion of this project was patient comfort,” said Dennis Greeno, partner at OZ Architects, Boulder, CO, the firm that designed the facility. “From the floorplan that minimizes patient travel inside, to the heating and cooling system at work behind the scenes, the goal to provide comfort for patients was woven into every aspect of the building.” Input from staff and patients weighed heavily into the building’s design.

The 30,000 sq.-ft., state-of-the-art cancer-treatment facility, also referred to as the Oncology Center, rests a mere 40 ft. above the Missoula Aquifer. The massive underground aquifer is all that remains of prehistoric glacial Lake Missoula, which at one point held as much as 600 cubic mi. of water—roughly half the volume of the Great Lakes’ Lake Michigan.

According to the Univ. of Montana, the aquifer flows at 3 to 4 ft./day; a rapid pace compared with most aquifers, which move that distance over the span of a year. In Missoula, the water is consistently around 50 F. It’s the ideal resource for groundwater-cooling applications.

To make good use of the aquifer, the Oncology Center uses a “pump-and-dump,” groundwater-cooling system. Water is drawn from the ground, pumped through a large plate-and-frame heat exchanger, and injected back into the aquifer.“The Montana DNRC (Department of Natural Resources and Conservation) handles well permitting here,” said Adam Perine, senior hydrologist with NewFields, Helena, MT, a national environmental consulting firm. “If water use is non-consumptive and under 350 gpm, it’s a pretty simple process to acquire the correct permit.” Perine designed the three wells that serve the facility. Although the system only calls for 300 gpm, the wells have been tested at 500 gpm.

“It’s the most holistic approach to geothermal cooling,” said Jared Swartz, office manager for Associated Construction Engineering Inc. (A.C.E.), Missoula, the company that designed the mechanical, electrical, and fire-suppression systems at the Oncology Center. “No compressor, no refrigerant, just a pump and a stainless-steel heat exchanger to handle the building’s 1M BTUH cooling load.” 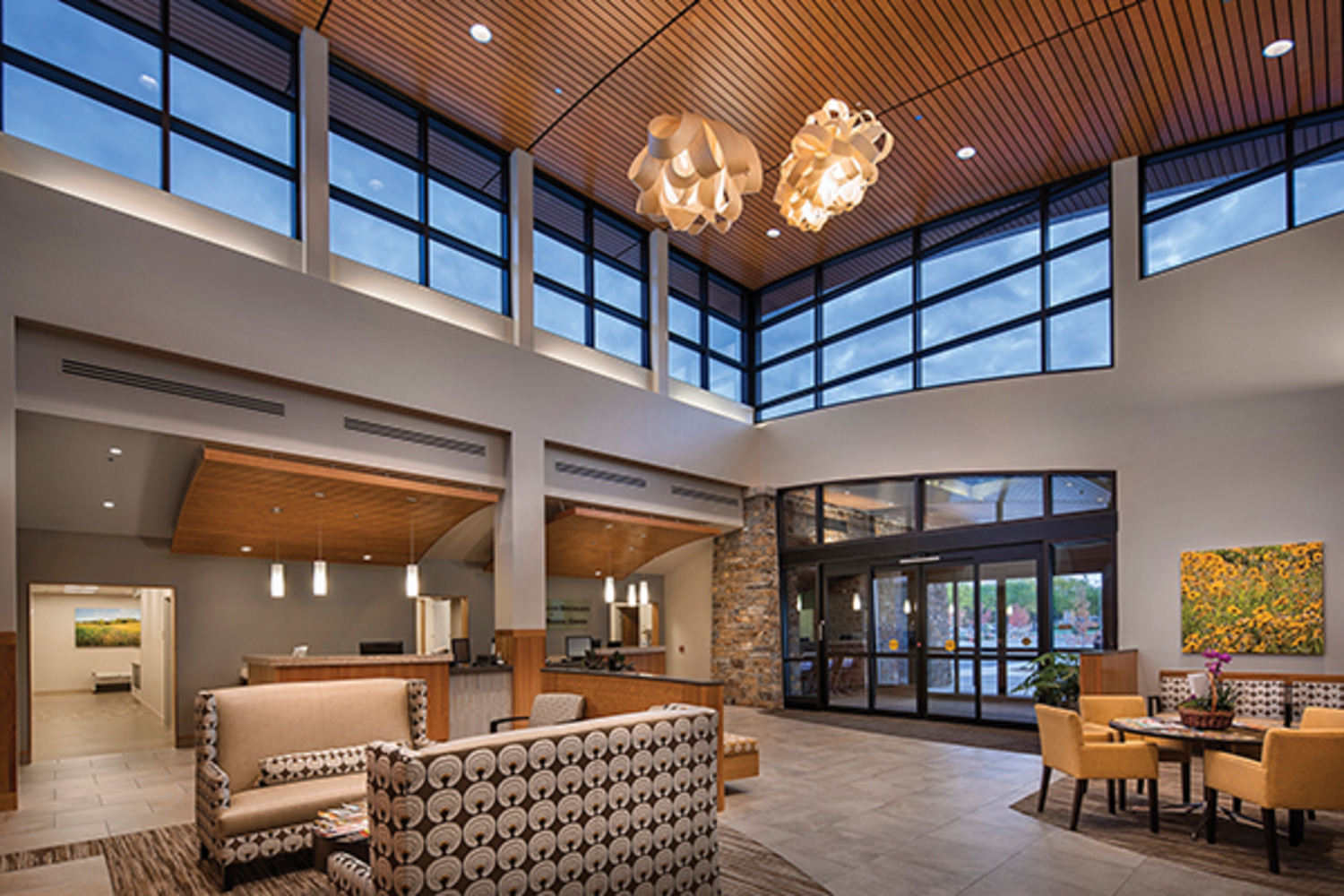 “The pump-and-dump cooling system isn’t that unusual here in Missoula,” said Cory Hanninen, project manager at 4G Plumbing and Heating Inc., Missoula. “The system is designed to bring in groundwater at about 53 to 55 F, and return it to the ground at roughly 65 F. The aquifer is so huge that every building in Missoula could use it for cooling, and it wouldn’t make a noticeable effect on the source temperature.”

The cooling system that A.C.E. designed stems from redundant, 10-in.-bore extraction wells, each 130-ft. deep. Each supply well has a 20-hp submersible pump. Groundwater moves through the 350-gpm plate-and-frame heat exchanger, and is then returned to the aquifer through an injection well. On the building side of the big heat exchanger, redundant 15-hp, VFD-powered Taco (Cranston, RI) FI3011 frame-mounted, end-suction pumps circulate a glycol-based solution to rooftop air-handling units that supply ducted air conditioning.

“We’ve completed roughly 25 buildings in Missoula that tap the aquifer for cooling,” said Swartz. “It’s more prevalent here than anywhere in the state, but they’re starting to follow suit elsewhere along the western side of Montana, where the water-table aquifers are large and easily accessible. Last year, we designed a similar system for a large hospital in Kalispell.”

A.C.E. and 4G work together routinely. The Montana-based firms are accustomed to the design factors seen in the Intermountain West: long, cold winters with high snowfall and short, hot summers with very low humidity.

“We’ve concentrated on medical-facility work and have been very fortunate to work on many facilities throughout the Northwest. On average, we complete $250 million in construction each year, with medical facilities accounting for more than half of that,” said Swartz. A.C.E. is a diverse firm with 30 employees in five locations: Missoula, Belgrade, and Billings, MT; Minot, ND; and Sheridan, WY.

Similarly, 4G’s focus is commercial and industrial work, also with specialization in hospital work. The mechanical firm’s 45 employees have worked on many medical facilities throughout the Northwest. 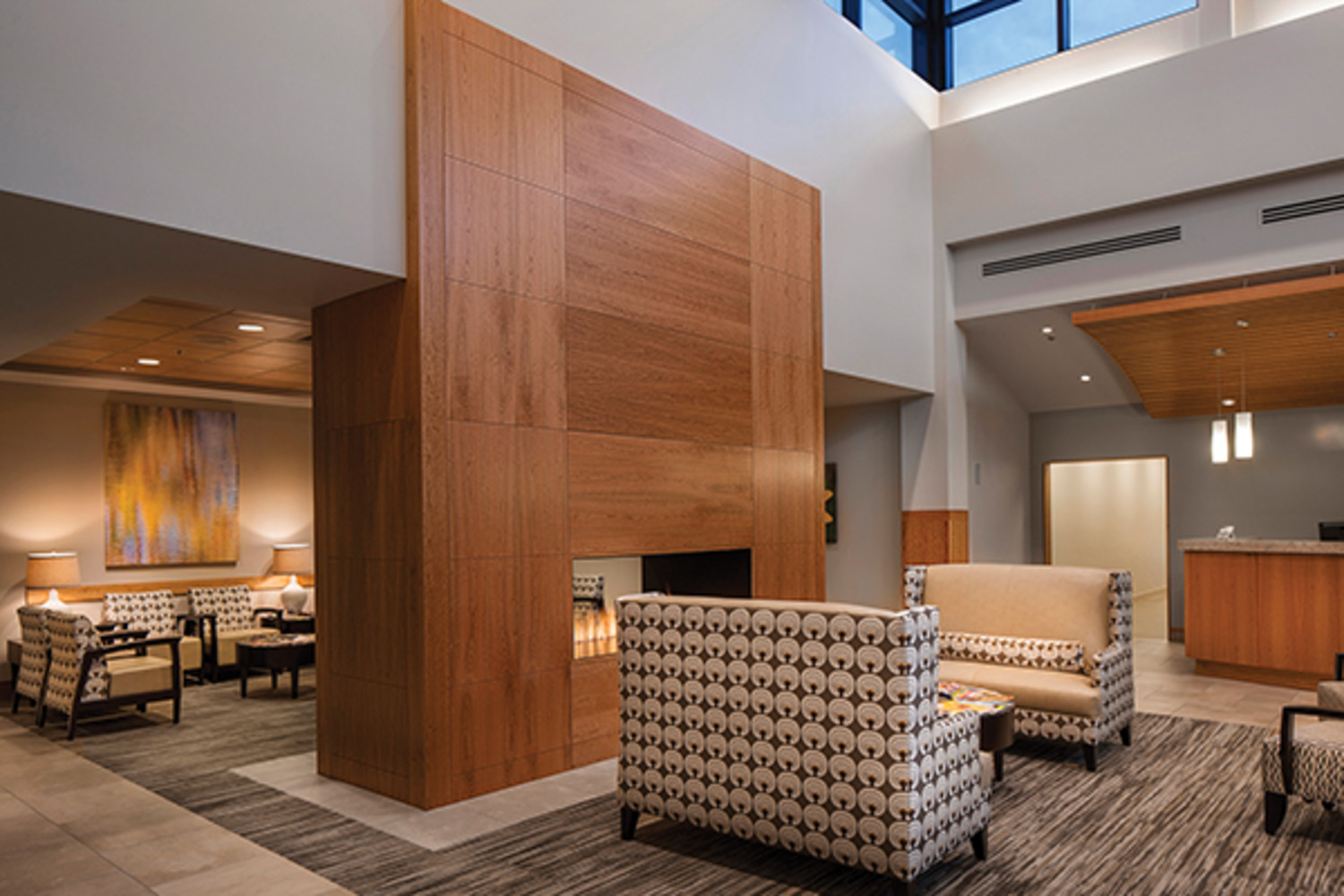 While the groundwater system at the Oncology Center is a unique way of cooling a building, the heating side of the system includes its own uncommon elements.

“There’s not one pleasant thing about receiving chemotherapy treatments,” said Swartz, “so a design criterion for the heating system was to make the physical atmosphere as comfortable as possible for patients that will already be uneasy and distressed. The chemotherapy infusion rooms have in-wall radiant panels that provide the first-stage heat.”

The low-temperature branch stemming from the small heat exchanger also heats 2,400 sq. ft. of sidewalk outside the main doors. Before the building approach was poured, 4G installed 3/4-in. Watts Radiant PEX+ (Springfield, MO). The concrete is kept dry throughout Montana’s October through April snow season, adding further to patient comfort, safety, and convenience.

“We like to use Taco and Watts Radiant products because of the local support we get from Vemco Sales, Missoula,” said Hanninen. “Beyond that, it’s good to know we have the performance we need and manufacturers willing to stand behind their products.”

The plumbing for the Oncology Center was completed by 4G as well. Domestic hot water is supplied by a 100-gal. gas-fired water heater so that the boilers don’t need to run through the summer months.

The groundwater cooling components came together smoothly, and the radiant portions of the project were no challenge for the 4G crews. “But we were up against a fast-track, nine-month timeline,” said Hanninen. “Between drilling, plumbing, heating, cooling, and working around other subcontractors, we had our hands full.”

Western Montana doesn’t see seismic activity like California, but Big Sky Country isn’t inactive. At the Oncology Center, seismic restraints were used for potable water lines, and the pumps and boilers were anchored to the concrete slab. On the roof, the large air handler rests on a seismic-compliant Thybar Vibro-Curb unit (Addison, IL) with integral spring vibration isolation.

“4G works frequently with A.C.E, and it definitely benefits both companies,” said Hanninen. “But our rep relationships are just as important. In Montana, we’re farther down the supply chain for a lot of things. Nothing is right around the corner, so Jared and I both lean on Dennis Nisbet, at Vemco Sales, a little harder than a contractor in New York might have to.”

“We do our best to be a resource to both firms,” said Nisbet, who handles outside sales for the 35-year-old Northwestern manufacturer’s representative firm. “We get involved in as many projects across the state as we can. A.C.E. usually designs the systems and sizes boilers, pumps, etc. I help them select the appropriate equipment for the application. As you can see at the Oncology Center, we often get into some unique applications.”

Nisbet worked closely with Swartz as he did most of the front-end engineering work at the Oncology project. “I think our biggest challenge was staying under budget and ahead of the 12-month design/construction timeframe,” said Swartz. “Dennis definitely helped with both, as he does on all our projects.”

The fast-flowing aquifer, which is constantly recharged by the Clark Fork River, is a boon to the Missoula community. When coupled with engineering and mechanical aptitude, it indirectly makes healthcare more affordable for those nearby.

“The hospital received a $43,000 rebate from the local utility for installing the groundwater cooling system,” said Swartz, “but we’ve calculated that the system also provides an energy savings of around 150,000 kWh per year when compared to a traditional chiller system, meaning an additional benefit of $11,000 or so per year.”

“Before this building was complete, we enjoyed very high satisfaction with our cancer treatment services, but we wanted a facility that could offer even more,” said Devin Huntley, vice president of operations at Missoula Community Medical Center.

“With the new facility, we set out to provide the best atmosphere and service possible,” said Huntley. “Patients and family members now tell us every day how much they love it. From an administration’s perspective, I can honestly say that this is the first project I’ve worked on in a long time that far exceeded my expectations.”

The building is positioned to take advantage of the mountain views and the soon-to-come healing garden. Few people who enter the facility know about the natural resource that lies beneath their feet, helping to make the building a reality.