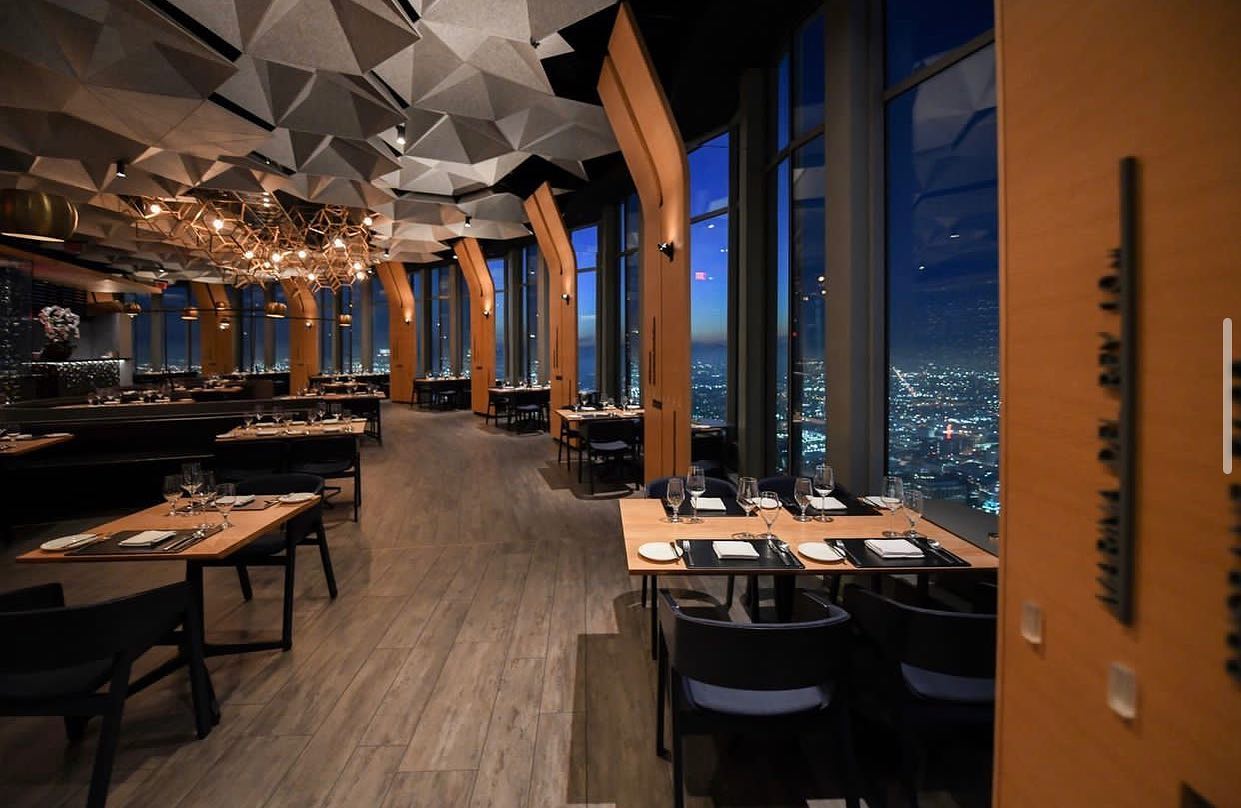 Los Angeles is known for its sunny climate, beautiful beaches, and entertainment industry. However, it is also home to some of the country’s most celebrated restaurants.

Restaurateur Emil Eyvazoff was drawn to the 71st floor of the iconic U.S. Bank Tower in the city for the site of his next unique dining experience.

Eyvazoff is well known for his high-rise restaurant and nightclub Takemi Sushi and Elevate Lounge in the city’s Financial District as well as his ability to create memorable dining experiences.

It is also one of the most recognizable buildings in Los Angeles, having been featured in films such as Independence Day (1996), The Day After Tomorrow (2004), and San Andreas (2015).

When dynamic glass transforms dining experience, it means the architect behind it succeeded. It will take a great architect to design one.

To design the space, Eyvazoff enlisted architecture firm Tag Front, West Hollywood, California, which had assisted him in designing other restaurants.

However, the project presented a unique design challenge because Eyvazoff wanted to create a restaurant, 1,000 ft. in the air that would offer 360-deg. views of the city and be free from heat gain and glare despite the intense rays of the California sun.

Another challenge the team had to take into consideration was that the U.S. Bank Tower is located in busy downtown Los Angeles, and southern California is prone to severe storms and weather.

The architects realized that along with the climate of the area, solar control would also present a major challenge to their design plans.

They wanted to create a circular, casually chic restaurant space that would feature views of the mountains and Long Beach harbor.

Due to the height of the restaurant, above ground level, as well as L.A.’s summer temperatures, the architects explored solutions that would reduce heat gain and glare without compromising city views.

Although blinds and shades would help minimize heat gain and glare, they would also obstruct the view, which was one of the major selling points for the restaurant in the first place.

The idea that dynamic glass transforms dining experience, these are just some of the challenges confronting the builders to make that idea a reality.

After exploring a variety of solar-control options, Tag Front chose SageGlass, from Sage Electrochromics Inc., Faribault, Minnesota, due to its ability to optimize daylight, outdoor views, and provide comfort while preventing glare, fading, and overheating.

SageGlass has a wide dynamic range from 1 percent to 60 percent.

When it is in clear mode, at 60 percent visible light transmission, it performs like most other low-E glass in commercial buildings, but when it is fully tinted at 1 percent, it blocks 99 percent of visible light, preventing glare.

On the other side of the spectrum, SageGlass also has a low .09 solar-heat-gain coefficient, blocking most of the intense heat from the sun, which allows restaurant guests to sit right next to a window and feel comfortable even when the sun is at its peak.

SageGlass worked with Giroux Glass, Los Angeles, to install approximately 3,000-sq.-ft. of dynamic glass on the façade of the restaurant. 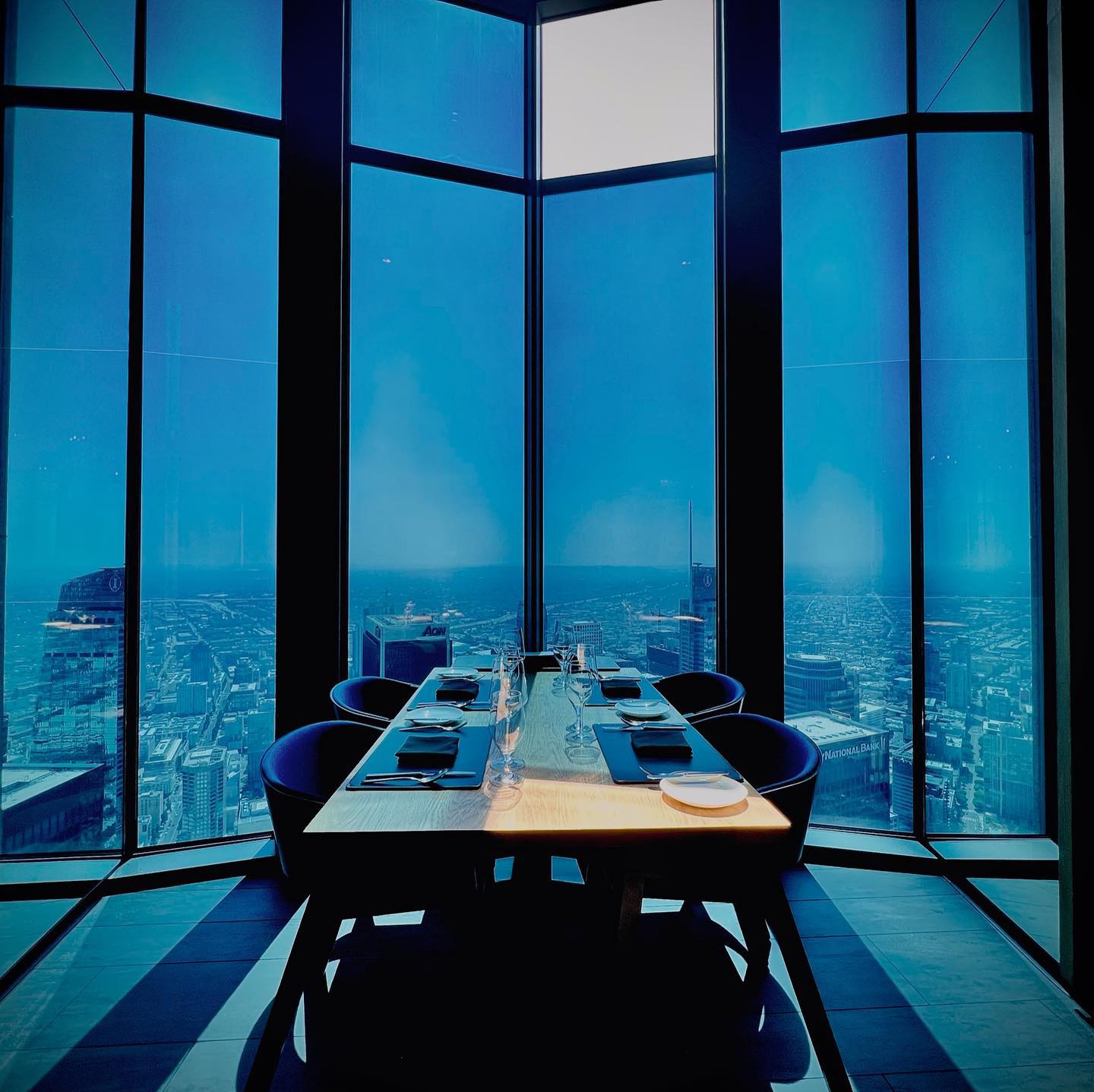 To meet the restaurant’s unique design challenges, the bay windows are in four sizes. Upon completion, Giroux Glass installed a total of 192 insulating-glass units and 48 tableside vents.

The vents can be opened by diners to bring in a rush of fresh air and the sounds of the city from far below, allowing them to feel engrossed in city life while simultaneously maintaining a bird’s eye view of the city during their dining experience.

Logistical challenges associated with the installation of the glass panels due to the height of the building, its busy mid-downtown location, and predicted severe storms in Southern California were anticipated.

However, the installation, which began in January 2016, ran smoothly.

The weather was not as wet as predicted, and only two days were lost due to weather - one for rain and one because of high winds.

The electrochromic glass’ manual override system, accessible by any of the 71Above restaurant staff, can be used to alter the ambiance of the restaurant for hosting special events such as weddings or business meetings.

As dynamic glass transforms dining experience, SageGlass makes it happen for patrons of 71Above.

Along with providing a unique dining experience and helping proprietor Eyvazoff realize the vision for his restaurant, SageGlass also serves as a sustainable building solution very much aligned with California’s green-building and sustainability initiatives to reduce the state’s environmental footprint through energy-efficient building design and construction.

It’s true that dynamic glass transforms dining experience. One restaurant in downtown L.A. Can attest to it.

71Above officially celebrated its grand opening on July 15, 2016, and has already received positive reviews from diners and food critics.

Diners continue to flock to the restaurant to experience the food and the iconic views, made possible with SageGlass.