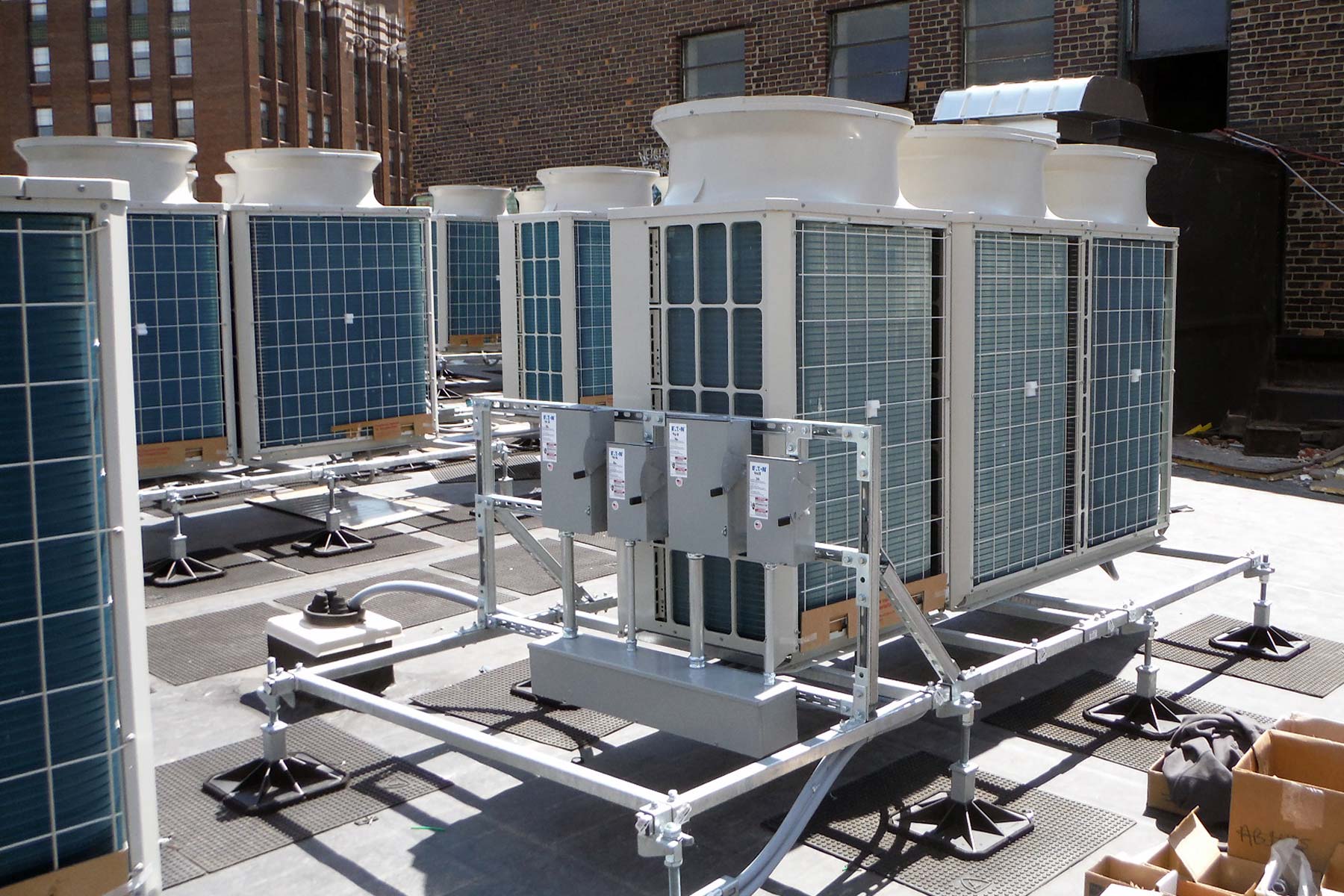 VRF holds key to detroit renovation. Although Detroit has lost more than half of its population since 1950, downtown activity in the form of rehabilitation of historical buildings, among them the $94.5-million renovation of the David Whitney Building, a Class A skyscraper, is a positive economic and aesthetic sign.

The building has been restored to its previous grandeur and now offers luxury residences, the Aloft Detroit hotel, a restaurant, and a bar. VRF holds key to Detroit renovation means the key to the renovation was retrofitting the entire building with more than 600 tons of variable refrigerant flow (VRF) technology from Mitsubishi Electric U.S. Inc., Cooling & Heating Division, Suwanee, GA.

Vince Dattilo, vice president of construction and project management, Roxbury Group, Detroit, the developer on the job, knew his team had a big project ahead of them with bringing modern-day cooling and heating to the David Whitney.

The building dates to 1915, and sat vacant for 15 years before the renovation. The mechanical systems needed updating, but the sheer size and mass of the preexisting structure presented an immediate problem.

“The floor is 22 to 28 inches thick. So right off, that made new HVAC challenging from a cost perspective. Forced air, which involves running tons of ductwork, would have meant high costs - if ductwork was even possible.”

He continued, “At the same time, we were interested in bringing a more efficient and ductless cooling and heating solution to Detroit: VRF. People were skeptical–contractors said it was more expensive and you couldn’t afford it. We proved them all wrong.”

Enter Don Nichols, PE, LEED AP, senior mechanical engineer, Strategic Energy Solutions, Berkley, MI. Nichols was brought onto the team and given two determining factors whether VRF was in fact the most viable HVAC system: cost and energy efficiency. He said, “Cost was about first cost. We compared two types of systems, water-source heat pumps and VRF. The construction cost for the VRF came in less than water-source heat pumps.”

Dattilo explained that the VRF design used “a pre-insulated line set distributed locally and manufactured in Italy. We were looking at close to five miles of piping, so compare VRF to getting guys in here crawling through tight spaces to install insulation—that’s a lot of money saved on that one piece alone.”

Nichols’ consideration of energy efficiency was about long-term utility cost. “We did energy modeling for the building, looking at the yearly energy cost compared to a baseline of typical HVAC. Ultimately, VRF was a lower first-cost installation and lower utility operating costs,” he said.

The result was that the original estimate of $6.8 million with a forced-air system came down to $5 million with VRF. Dattilo said, “That’s the point where we said VRF makes sense financially. Forget about the energy efficiency and lack of ductwork; getting the right number is super important.”

VRF not only brought the price down, it solved another key project requirement—maintaining the building’s existing architecture. Contractor Rick Mead, president, RW Mead & Sons, Fraser, MI, said, “We could not disturb any of the historically significant elements of the building. To solve for renovating the historic building, VRF with its small-diameter piping rather than large-diameter forced-air ductwork made sense.”

Mitsubishi has been very thoughtful in the manner in which they introduce their equipment to the North American market. They’ll train local distributors, who in turn bring an experienced engineer onto the team. The local team here has two maintenance staff, an engineer and a hydronics engineer. So Rick doesn’t have to call the Mitsubishi headquarters; he can just reach out to the local distributor. Other VRF manufacturers aren’t doing that. They just can’t react quickly enough.

Mead echoed the sentiment: “When I looked at Mitsubishi and other players, I saw that Mitsubishi is very well-represented locally to help us resolve issues.” Dattilo added, “They’ve also done more installations locally - municipal buildings, churches.”

Mead said his firm has even done some of those projects in the downtown area, including “converting an older building into a residential and office space.” These successful projects allowed the development and construction team to feel confident in their selection of Mitsubishi Electric VRF at the David Whitney.

Despite all of the cost concerns and the building’s structural challenges, that confidence was not unfounded. “The installation went very, very well,” said Mead. Nichols’ design split the condensers across three areas - on the roof, in an alley, and in the basement-level areaways - to minimize the vertical travel distance of line sets, thereby staying within Mitsubishi specifications.

Since installation, the VRF system has been doing what VRF does—keeping everyone comfortable while keeping costs down. Mead said, “In January/February, the system was put to a test, and it provided the heat needed to make people happy and comfortable.”

Some of those people are guests in the 136-room Aloft hotel that occupies floors one through nine of the building. Aloft’s director of engineering, Scott Mondock, described the rooms as “spacious with high ceilings. These are higher-level rooms–real modern, very comfortable, with a clean-cut look.”

The vertical and ceiling-concealed indoor units contribute to that clean look and make up what Mondock called “probably the best system I’ve ever had a chance to work with.”

Mondock appreciates the system’s ability to cool and heat simultaneously “24/7, any time of year. And this is higher-quality operation; the rooms are more evenly cooled/heated.” It’s no surprise that he said, “The guests love it. We haven’t really had any complaints about it.”

The temperature stays consistent throughout the building, with the system getting pretty close to the set points. Older systems have at least a two-to five-degree differential. But with this VRF system you set it to 72 degrees, say, and the system is usually within one degree of that, often right on the money. So this one can really maintain the set temperature of the thermostat.

Behind the scenes, the centralized controls system has been a boon to the entire building’s management team. Dattilo said, “The BACnet controls allow you to look at the system remotely - every fan coil, every condenser. We can set alarms. We can see what folks are doing 24/7/365.”

Mondock uses the controls system “to follow the system’s operation, establish set points, and troubleshoot. This is all by the touch of a finger on my cell phone, which is very nice and convenient.”

Mead explained that such a high level of control is important because “this way you can fix a problem before it gets ugly.” For the most part, though, it’s smooth sailing with the set points Mead put into place and easy maintenance for the system.

Regarding the latter, Mondock said, “VRF is a lot easier to take care of than PTAC systems, which makes it easier to keep up on maintenance with a system as large as mine. And keep in mind that these systems are pretty much running 365 days a year.”

In the end, Nichols concluded about VRF holds key to detroit renovation, "The David Whitney is a big player in the Detroit revitalization. It’s been well received and is in the heart of everything downtown. It’s an iconic place, and now it’s the hot spot in Detroit."

Mead said this in reference to the function and success of VRF. "A lot of eyeballs are looking at this application. Happily, the proof is in the pudding - VRF is a viable, excellent system, and the whole project serves as a catalyst for where the city is going."